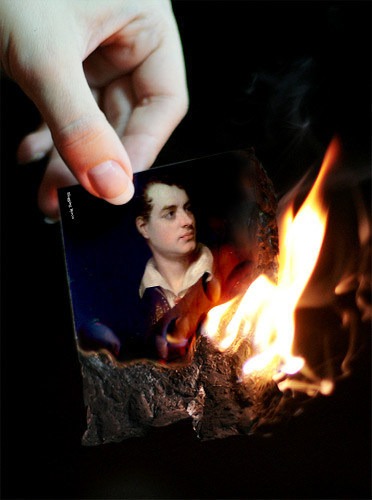 On this day November 5 in 1605 Guy Fawkes burst forth into English history as he was found in the bowels of the House of Lords dreaming of a Catholic rebellion, surrounded by 36 barrels of gunpowder while nursing a grudge against the Protestant King James I.

414 years later and the failure of the Gunpowder Plot continues to be celebrated throughout England with bonfires, firework displays, delicious toffee and as effigies of Guy Fawkes are burned symbolising the freedom of democracy.

‘Is this Guy Fawkes you burn in effigy?

Why bring the traitor here? What is Guy Fawkes to me?

Guy Fawkes betrayed his country and his laws,

England revenged the wrong; his was a public cause…‘

In November 1812 and 207 years after Guy Fawkes had been denied his dream of a glorious Catholic emancipation, the disgruntled and disgraced “barrel of gunpowder” Lady Caroline Lamb was participating in her own unique celebration at Brocket Hall.

Unable to accept that her affair with Byron was finally over she enacted revenge by burning a straw effigy of the noble poet on a large bonfire.

And as small children in white dresses danced around the burning pyre, she added fuel to the fire as copies of his letters, his portrait and his gifts were ceremoniously burnt.

‘But I have private cause to raise this flame

Burn also these, and be their fate the same,

Rouge, feathers, flowers, and all those tawdry things

Besides those pictures, letters, chains and rings –

All made to lure the mind and please the eye…’

‘And gold and trinket glitter in the flame –

Shake not your heads, nor say the lady’s mad…

Judge not of others for there is but one

To whom the heart and feelings can be known..‘

As Lady Caroline continued her pursuit of Byron with some desperate and bizarre attempts to gain his attention including the payment of a draft into his depleted bank account for an imaginary loan – her feelings became ever more problematic as he confided to the listening ear of Lady Melbourne:

She has sent me a Banker’s receipt for some money she swears she owes me, but which I will have nothing to do with, I have returned it, & if the money is not removed from Hoare’s & my name withdrawn, I shall most assuredly dispatch it with her compliments one half to the Magdalen asylum & the other to St Luke’s as a donation & return in kind for her bonfire..

His choice of charitable benefactors as the Magdalen Asylum offered sanctuary for reformed prostitutes and St Luke’s the asylum for lunatics surely tells us that he DID consider the lady WAS indeed mad!